The United Nations Association in Canada (UNA-Canada) is a historic national charitable organization that educates and engages Canadians on the work of the United Nations and global issues that affect everyone.

UNA-Canada attracts citizens at every level of society across generations, bringing empathy-based educational resources to the brightest and the most marginalized youth within Canada and the world’s poorest countries.

They focus on a lot of youth programming, and their main goal is to engage the youth and give them the tools to be civically engaged while addressing the needs of their community. UNA-Canada has a national network of branches, volunteers and programs that inspire and aim at growing global citizens. They engage young citizens in the age range of 15 to 30+ in various entrepreneurship, international and other kinds of programming.

In the year before the pandemic hit, UNA-Canada had hosted an in-person symposium; a celebratory event where multiple participants present what they have accomplished throughout the year.

They had to quickly move online due to the pandemic and wanted to ensure that participants had a similar experience online as they have in previous in-person events.

On February 20th 2021, the Generation SDG Symposium convened over 200 youth, to engage national leaders and local industry professionals online. This was a unique opportunity for Canadians and partners around the world to engage with our remarkable cohort of youth, aged 15-25, who are addressing some of the critical issues facing our global community today, from climate change mitigation to reconciliation awareness to reducing social inequalities. 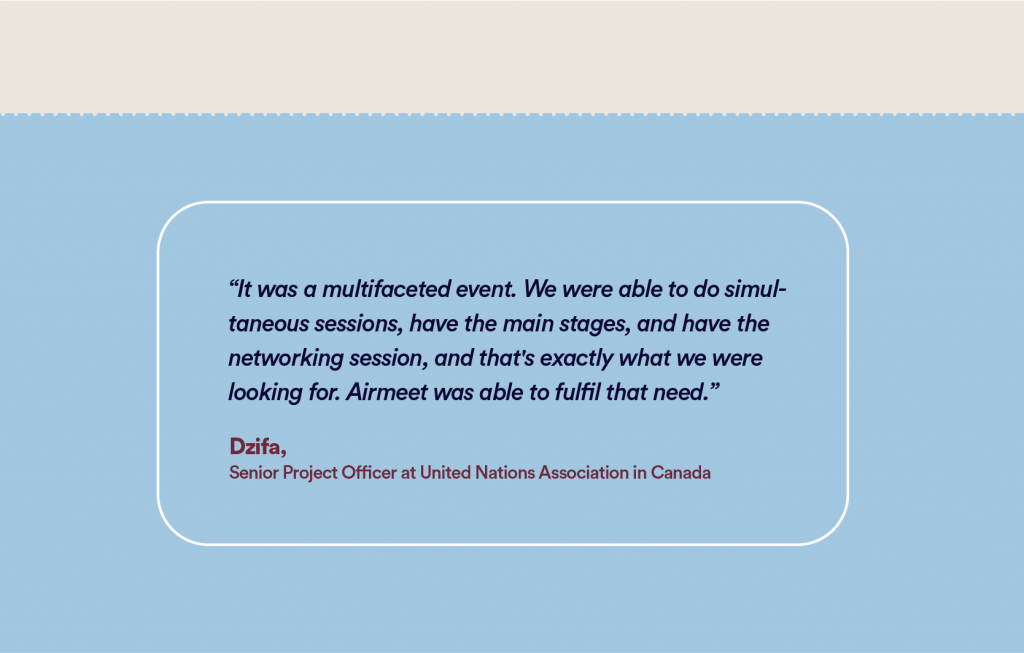 Challenge: Finding the perfect virtual platform partner and getting the nod from senior management

Dzifa, Senior Project Officer at United Nations Association in Canada ‘Generation SDG’ team, talked about her team’s struggle to find the right virtual platform solution and then convince senior management about its merits.

She mentioned how Airmeet’s value and its versatile and interactive features that provide for any type of event helped the team get the approval they needed.

Talking about how they explored Airmeet, she mentioned, “A team member at Airmeet essentially just gave us something like a sandbox to play around and see what we could do. We were able to easily gather all our information regarding the features and the cost etc. For non-profits, the cost is such a big factor when it comes to these decisions.”

Dzifa’s team rallied, explaining to the management the type of event they wanted to have. They enumerated why they needed particular features such as simultaneous sessions, social networking tables and more, for the event. They presented their case for Airmeet and finally got approval just two weeks before the event date.

The value that Airmeet brought with its versatile and interactive features that provide for any type of event helped make a case for Airmeet. When prompted about how senior management felt about Airmeet post the event, Dzifa divulged, “Some of the senior team did come to our event, and I think they saw that it was such a superior experience. We couldn’t have used Zoom for this event.”

Challenge: Speedy onboarding to Airmeet with the event only two weeks away

The team had just two weeks leading up to the event and needed to ramp up very quickly. That is where Airmeet’s user-friendly interface and excellent customer care came into play.

Dzifa shared, “The team at Airmeet was able to accommodate us so quickly even though it was very last minute. It was a good experience. Airmeet was very considerate in having two sessions with us, just trying to get us through all the features. I personally went in and made a walkthrough event. I played around with who I can make a speaker, what that involves, and the team tried out various features. We roleplayed to assign hosts, and other responsibilities checked what the backstage looked like etc. We also tried to do run-throughs with our speakers ahead of time.”

Dzifa also described how she could effortlessly play the part of tech manager on the day of the event, despite having only two weeks to get familiar with the platform.

The SDG symposium was an event where participants could attend and present what they’ve done throughout the year, and their work could be honored. They did have a keynote speaker, but the event was mainly about the participants.

Dzifa explained, “This is why we had to have simultaneous sessions. We had different groups of participants presenting at the same time. Then we had a networking session because we wanted participants to be able to meet up with local community leaders and talk to them about what they’ve been doing”.

Airmeet features that made this possible include:

Multiple Formats: Airmeet allowed UNA-Canada to host its Symposium with a large number of sessions running simultaneously along with opening remarks and main stage events. with ease. No matter their required format or scale, Airmeet offered a lag-free experience with superior HD quality. UNA-Canada hosted

Social Lounge: Dzifa shared, “ I think one of the things that helped us make our
decision for Airmeet was the lounge; that was the main thing that spoke to us. Other platforms also have simultaneous sessions and things like that, but the lounge was such a great feature.” Her team set up more than 20 tables with different logos and table names to ensure a rich and relevant networking experience for all the attendees.

Upload Videos: This was a feature that Dzifa’s team really appreciated. She said, “The video upload feature worked well. Once we could compress and upload the videos, it was pretty smooth to just bring them up on display. We also had musical and spoken word performances that were recorded on set, and it was so amazing just to be able to play the videos so easily. That was a great feature.”

Airmeet provided a rich set of features to facilitate the various things UNA-Canada was looking for from their event.

As we discussed whether Dzifa would consider using Airmeet in the future for a virtual or hybrid event, she said, “UNA-Canada has programs that are regional, national and international in scope. Given the Covid19 pandemic, we plan to continue educating on issues that affect us all through virtual or hybrid events, in accordance with health and safety protocols.”

UNA-Canada had a great experience hosting its first virtual symposium on Airmeet.

Take a Demo and see how Airmeet can amplify your event! Thank you for your interest.
Please share with us your basic details, we will get in touch shortly.