Qureca: Quantum Resources and Careers is a company that offers business development, professional services, and online platform training and recruitment. They handle recruitment on behalf of companies within the quantum industry by conducting interviews with people and finding the right candidate for the job.

Their main goal is to equip businesses with the knowledge that they need when it comes to quantum. They offer training courses so people can get up to date with how things are progressing in the quantum industries. This way, they aim to cover the gap between education and actually being in the workplace.

If there are companies who want to know more about quantum and work in the industry, they give them a detailed plan of what they can do to bring their business up to speed, along with the requisite resources.
Qureca organized an event called Quantum Latino, which was the first large quantum event in Latin America. It was designed to bring the world’s attention to the Latin American quantum community and to have investments from businesses worldwide.

It was a 3-day event with 60 speakers that brought together entrepreneurs, start-ups, researchers, and industry collaborators to network, connect, and learn from the industry leaders. About the event, David Marshall, the marketing assistant at Qureca, mentioned, “It had 44 talks throughout the event. We had companies and academics from the Latin American region hold talks about their research. We also had some panels and practical sessions throughout the event.”

Besides this, they also organized a Quantum Technologies Careers Fair to help connect leading employers with ambitious talent. The companies could communicate about their workflow and support the applicants with networking.

David added, “The career fair was a half-day event. It was quite a short one compared to Quantum Latino. We had nine talks throughout the day from companies that had sponsored the event.”

They have always been working online and had tried other platforms, including Hopin, but were more satisfied with features that Airmeet were offering, so made the move. David explains how they leveraged the platform’s features to host the virtual tech conference and the career fair. 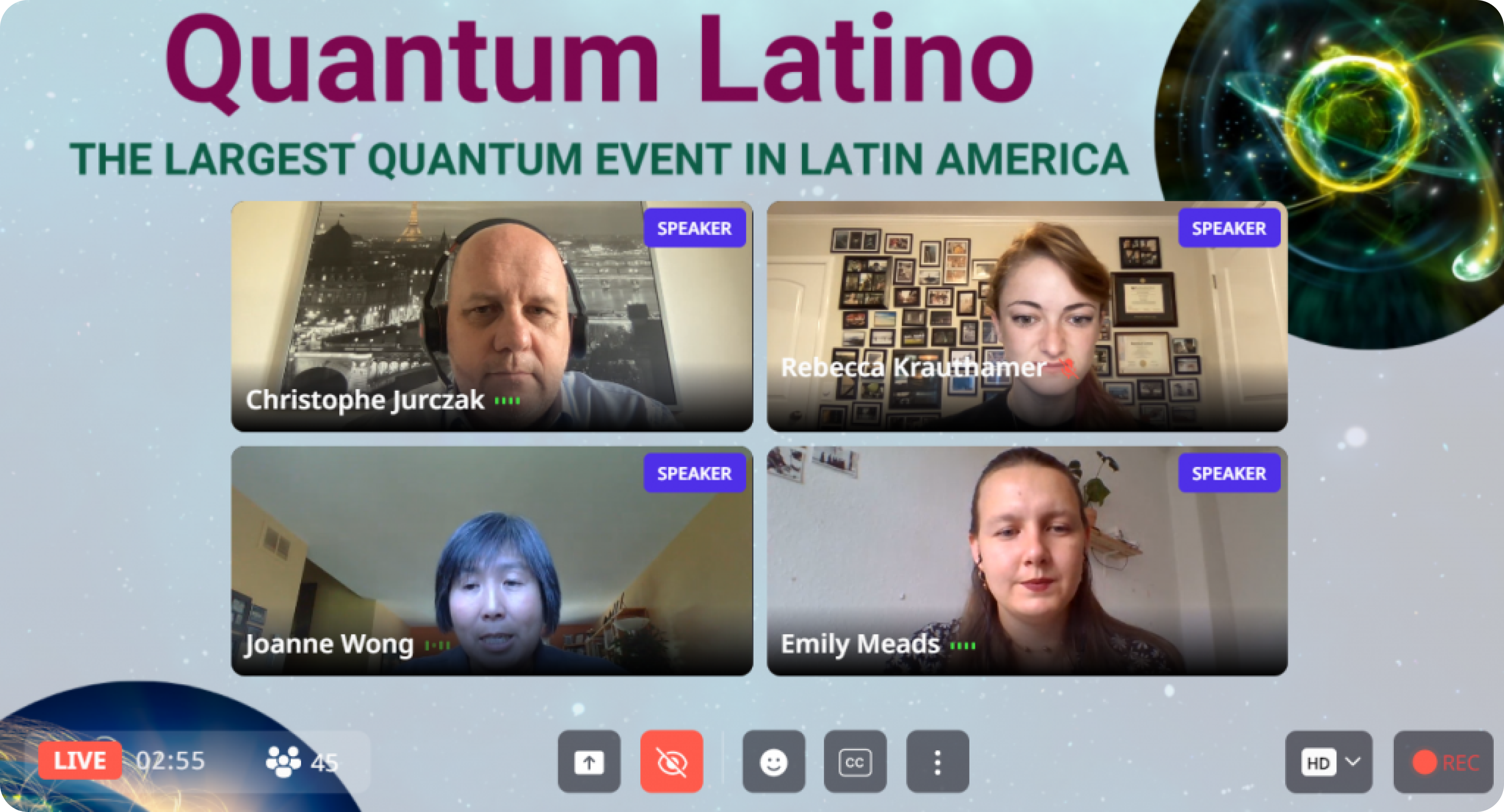 With the events having so many talks, it was a challenge for them to humanize the experience for the attendees and make it as engaging as a real-life event. With Airmeet, the events became huge successes, as the platform helped them engage and have effective interactions among the attendees as if in an in-person event.

The Quantum Latino event attracted worldwide attention, including big quantum technologies businesses, such as IonQ, Atos, and Honeywell. It had 20 sponsors, 10 of which networked and connected with the participants by hosting booths.

On the events’ participation, David said, “The limit for the Quantum Latino event we set 500, and we hit around that number. And in the Careers fair, we had about 1000 as the limit, and we managed to reach that as well. So both the events were quite full.”

David was able to achieve this through the following Airmeet features:

Booths: David was impressed by the booths. He said, “The thing that is attractive to us about Airmeet is the booths and the tables. It means that when the careers fairs get the potential employees, they can have a natural one-to-one chat with the employer who has got the positions open.

You can also get a more in-depth discussion about company culture. I think for us, that’s something that Airmeet offers that other platforms don’t.”

David further added, “The careers fair was quite well run. It was 3 hours of talks, and then people went into the networking area and the company booths. It was very handy to have the booths because a lot of people went to chat with the employees that were the main focus of the Careers fair.”

For the Quantum Latino event, David said, “There were 12 booths in total, 10 for sponsorships, and two for the people that were running the event. Throughout the entire event, we had the booths running.”

He added, “I liked the concept of having a custom booth. If you’re able to create a great exhibition booth, I feel that it really shows people that are visiting the booth how advanced you are as a company. I personally really enjoyed that aspect of things.”

Speed Networking: David shared, “Having a networking one on one area was great. Even if it’s a virtual event, people can actually have proper communication as if it was an in-person event. I think this makes it a lot more personal than just sitting down and watching the sessions.”

Invite to Stage: Appreciating this feature, David shared, “We can invite the audience onto the stage to ask questions. It adds a real-life element to the event and makes it a lot more interactive. There is not just a half-hour session with someone talking, but also attendees can come on to the stage, ask questions and get answers.”

Polls and Emojis: David said, “We used polls a few times to bring people’s attention to different areas of the event. We asked them if they used the networking or checked out the company booths, etc. We wanted them to know that these are the other Airmeet features that can be used besides the sessions.” He also mentioned that at the end of every talk, the attendees chatted and used emojis to interact. 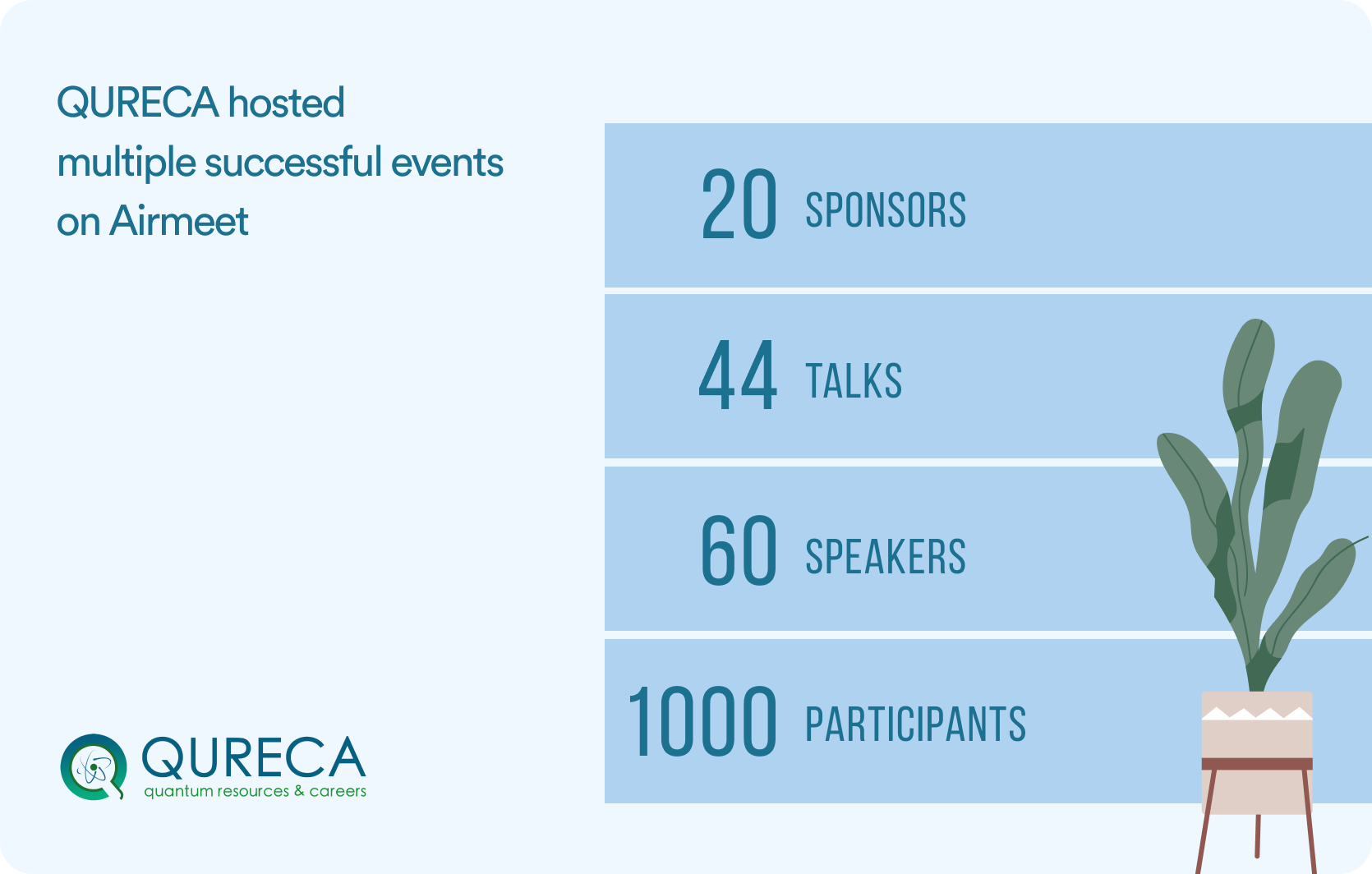 Challenge 2 : Having a seamless event experience for the attendees and sponsors.

Qureca needed a seamless event experience to engage their attendees as well as their sponsors.

They used the following Airmeet features to resolve this challenge:

David shared his plans by saying, “In the future, I don’t think we’re ever going to have a completely in-person event because a virtual event is so much more accessible for people. I think at most, we would go hybrid if that were an option. But we’ll always keep a virtual element in all of our events.”

When asked to describe Airmeet, he said, “I think the best way to describe it is that it really is a virtual exhibition, and it has all the elements that a real-life exhibition has.

You can go to the booths to talk to people or have a one on one with the people from the company. You also have presentations going on. You can show people a full run-down of the schedule, like a program that you get for an exhibition.”

Airmeet has impressed Qureca and helped them get great feedback and a massive turnout for their events.

Book a demo to know how you too can leverage Airmeet’s standout features to make your events huge successes.